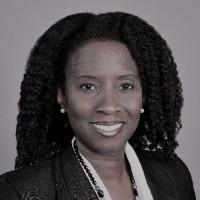 Deanna James was appointed President of St. Croix Foundation for Community Development (SCF) in 2015 as the first person of color in over 25 years to lead any of the 3 community foundations in the USVI. A small 30-year-old, unendowed place-based foundation, SCF has been a conduit for over $42 million dollars in strategic investments into the U.S. Virgin Islands. During Deanna’s 18 year tenure at SCF, she has overseen Grantmaking, Fiscal Sponsorship Services, and Educational Program Development. Currently, Deanna works intimately with a cadre of public, private, and civic partners throughout the Territory advancing the Foundation’s core mission of marshaling resources and encouraging greater philanthropic activity.

Today, she is leading SCF through the most radical shift in its history, building an extensive national philanthropic network and deepening the USVI’s nonprofit infrastructure through comprehensive capacity-building investments. A St. Croix native, Deanna holds a BA in Literature from Lehigh University and an MA in Public Communications from American University. She currently serves on the Board of the Southeastern Council of Foundations, and several national climate justice councils.