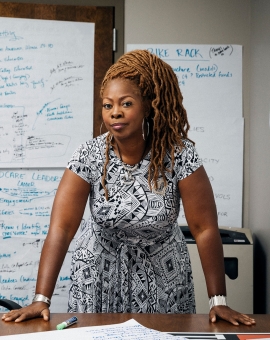 At the intersection of social justice, political empowerment, human development and the cultural arts one will find LaTosha Brown. As a catalyst for change, thought leader and social strategist, her national and global efforts have been known to organize, inspire and catapult people into action—not just lip service—enabling them to build power and wealth for themselves and their community. Honored to receive the 2010 White House Champion of Change Award, the 2006 Spirit of Democracy Award and the Louis Burnham Award for Human Rights, it is more than evident that LaTosha is passionate about leading social change for the purpose of advancing humanity, creating a more equitable redistribution of wealth and power around the globe.

Where other leaders see nothing but poverty, despair and destitution, this 2018 Bridge Jubilee Award and Liberty Bell Award recipient sees great opportunity. To her, there is more than enough resources on the planet to comfortably sustain every human being. Affectionately known by many as a “Black Renaissance” woman, her southern roots, coupled with her global thoughts toward people, ideas and money, have opened doors for her to maximize her voice in the U.S., as well as over 30 countries abroad. In addition to being recognized as a well-respected leader in the South who has led numerous initiatives, campaigns and special projects to empower marginalized communities, LaTosha is leading several international efforts to provide training, support and funding for women-led institutions based in Guyana, Senegal, Belize and Tanzania.

Having raised millions of dollars for a variety of causes throughout the U.S., she is most known for her philanthropic efforts as an effective fundraiser and resource person. From creating community-led funds to establishing donor networks, LaTosha has raised millions of dollars to support social justice causes and created projects that bring more investments into marginalized communities.

As the co-founder of the Black Voters Matter Fund and the BVM Capacity Building Institute, LaTosha is adamant about ensuring that all human beings have access to quality education, safety, security, peace, love and happiness. Striving daily to hear the voices of women in leadership amplified and supported, she is also working to eliminate human suffering through her vision of the Southern Black Girls & Women’s Consortium. Recognizing that her work is not rooted in strengthening political systems, governments or institutions—but in the advancement of people—LaTosha serves as an authoritative figure in the lives of thousands, if not millions. More than ever, she’s crystal clear that she is called to remind people of the power they hold within, pushing them through the birthing process of vision to manifestation.

Transforming culture through her singing and songwriting, this innovative storyteller is shifting the narrative of African-Americans through media, campaigns and nonprofit projects. Featured on CNN, HBO, MSNBC and Fox, to name a few, Latosha also proudly serves as the founder of Saving OurSelves Coalition, a community-led disaster relief organization that helped hundreds of families in the aftermath of Hurricane Katrina. Currently, she serves on the board of the National Coalition on Black Civic Participation, the Southern Documentary Fund, the U.S. Human Rights Network and the Congressional Progressive Caucus Center. After having worked with her, clients, colleagues and friends alike gain more clarity about their vision and life’s work, connection to quality resources, and a deeper sense of their own humanity after having encountered the incomparable LaTosha Brown.